In 1967 Partridge and Peebles theorized that young galaxies at high redshifts emitting Lyman-α photons might be a suitable tracer of large-scale structure. Those distant galaxies of high Lyman-α emission, so-called Lyman Alpha Emitters (LAEs) can be used to constrain the cosmological standard model at high redshifts and furthermore allow insight for the environment of those galaxies. The Lyman-α line corresponds to the energy difference from the ground state to the first excited state of neutral hydrogen. This makes the Lyman-α line resonant, i.e. absorbed photons are re-emitted at (or close to) the same frequency. This fact in combination with a high optical depth in proximity to the LAEs tremendously increases the path length of photons before their escape from the LAE and its surrounding. As a consequence of this large path length, large parts of the Lyman-α intensity is absorbed by dust or strongly diffused in space and frequency. This roughly motivates why even after the emerging idea of detecting LAEs at high redshifts, the first high redshift LAE (z ∼ 3) was not detected until 30 years later. At time of writing, the observational evidence increases dramatically as new instruments start their operation. A good example for a survey focussing on LAEs and furthermore using them to extract cosmological parameters is the Hobby-Eberly Telescope Dark Energy Experiment (HETDEX), which will try to constrain the Dark Energy equation of state to increased precision. HETDEX will boost the amount of detected LAEs to date by orders of magnitude, detecting of the order of $10^6$ LAEs at redshifts between 1.8 − 3.5. 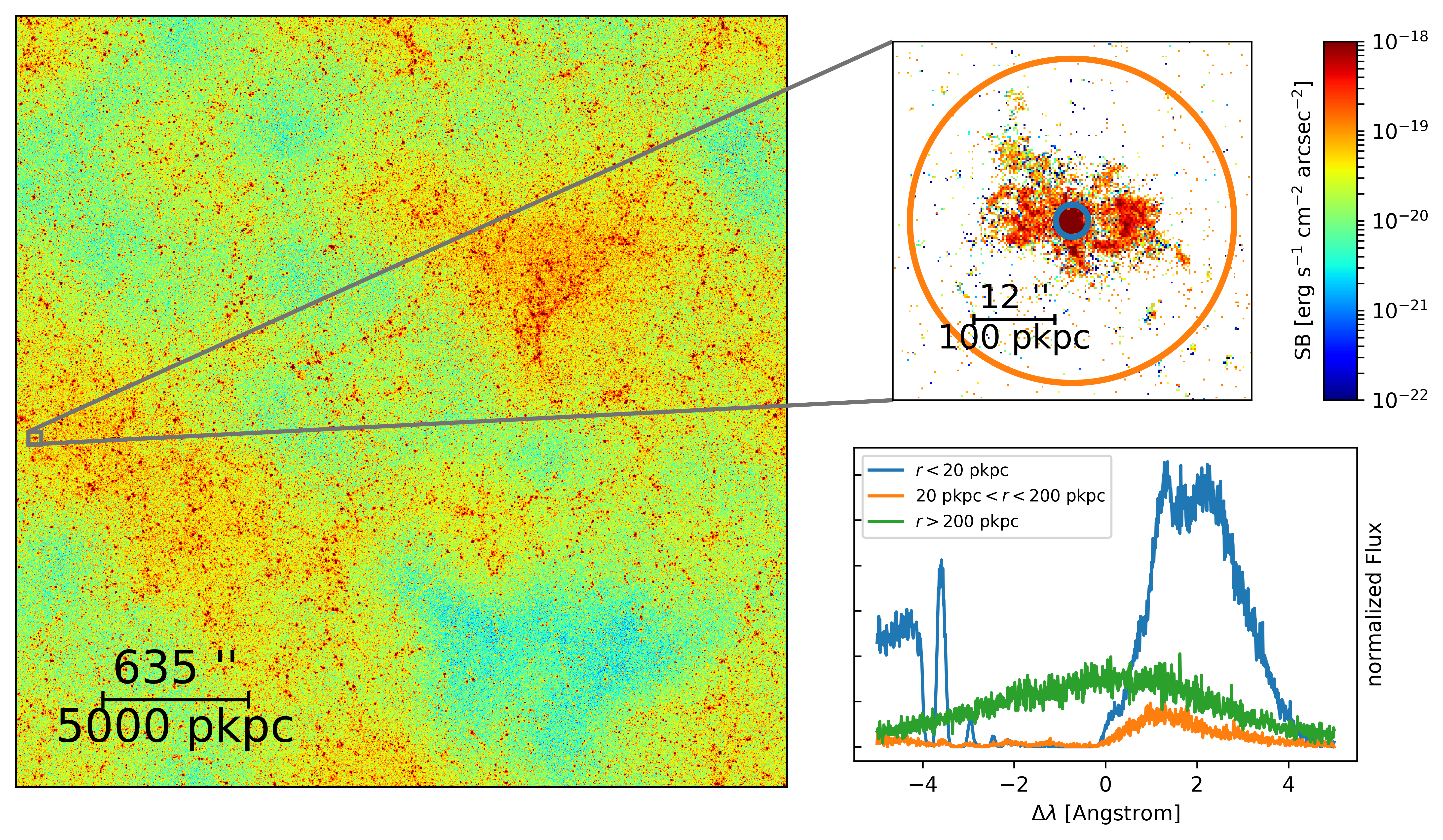 The resonant nature of the Lyman-α line and the high optical depths give rise to a complex radiative transfer that can affect large scale inferences from detected LAEs. This can be investigated by means of radiative transfer simulations as Monte Carlo approach on top of the Illustris simulation.

A short introduction on induced radiative transfer effects on the LAE clustering can be found here.

Radiative Transfer Distortions of Lyman-α Emitters: a New Fingers-of-God Damping in the Clustering in Redshift Space

The dimensionally split power spectrum/two-point correlation are standard tools for constraining the cosmological model from redshift …
Apr 13, 2018 10:20 AM — 10:40 AM Garching, Germany
Project

Lyman-alpha based emission line surveys are prone to errors in their interpretation due to the complex radiative transfer for this …
Mar 23, 2018 3:30 PM — 4:30 PM IPMU, Tokyo, Japan
Project Slides

Cosmological radiative transfer simulations of Lyman-alpha emission: the impact on the galaxy clustering

Lyman-alpha emitters can be used as probes of the large-scale structure at intermediate redshifts. Recent work discusses a possible …
Jan 1, 2017 12:00 AM Goettingen, Germany
Project Slides